Autograph: Martin Johansen got Alexander Rybak’s autograph on his body and will probably not wash that for a while

Happiness is an autograph on the belly

NORD ODAL: Martin Johansen will not wash his belly for a long time. Because his new hero has written his autograph there.

– It was very nice to talk to Alexander Rybak , but I don’t remember what he said, the guy from Sarpsborg says, who was one of nearly 100 mentally challenged  who flocked to the fiddle playing artist after the concert at Sand in Nord-Odal Saturday afternoon. Alexander Rybak took his time with autographs, and he was one of the main reasons for the high show factor of the 5th Morodalsfestivalen.

– For four years we have tried to get Alexander Rybak here, and for four years it has rained during our festival. Now Rybak came, and the sun came with him, a satisfied Olav Hagen said, who guided a crowd of more than 1,000 people through the weekend’s festival below Milepelen Inn. 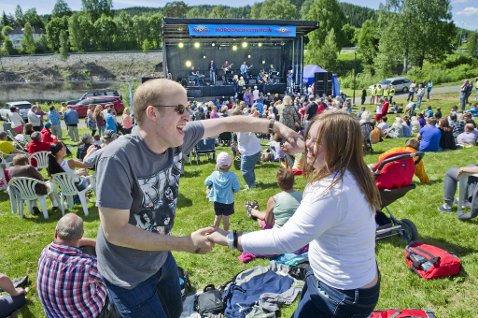 HAPPINESS: More then 1,000 festival-goers enjoyed the sun, music and life in Nord-Odal.

– Festival of the heart

The Morodalsfestival in Nord-Odal, a unique music festival for handicapped people, is about to take off. From the very beginning, five years ago, the festival has grown to be a national gathering arena, even with a more international flavor. People came from Målselv in the north to Stavanger and Sola in the northeast, and among the entertainers were also the blues band “United by Music”, with developmental disabilities from Amsterdam in the Netherlands.

– I notice that this is a festival that has occurred in the hearts of the people in Nord-Odal. And it’s very nice to see that the joy, which dominates during this festival, is allowed to grow, Alexander Rybak says to Glåmdalen.

He arrived in North Odal Friday night, and took part in the festival’s pub evening and languorous dance with the female festival-goers. 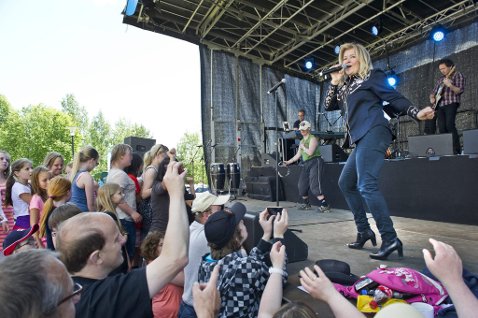 An honor: It is an honor to be chosen to sing at the Morodalsfestival, Elisabeth “Bettan” Andreassen says to Glåmdalen.

– An honor to be here

Elisabeth “Bettan” Andreassen was the second big draw during Morodalsfestivalen on Saturday. She has been in Nord-Odal many times before, not least in the musical pair skating with Jan Werner Danielsen. But Bettan has never been involved in the Morodalsfestival before.

– It is an honor to be allowed to sing and be a part of the joy that the festival goers show. This is a warm and meaningful arena, Elisabeth Andreassen says.

Short video from the festival